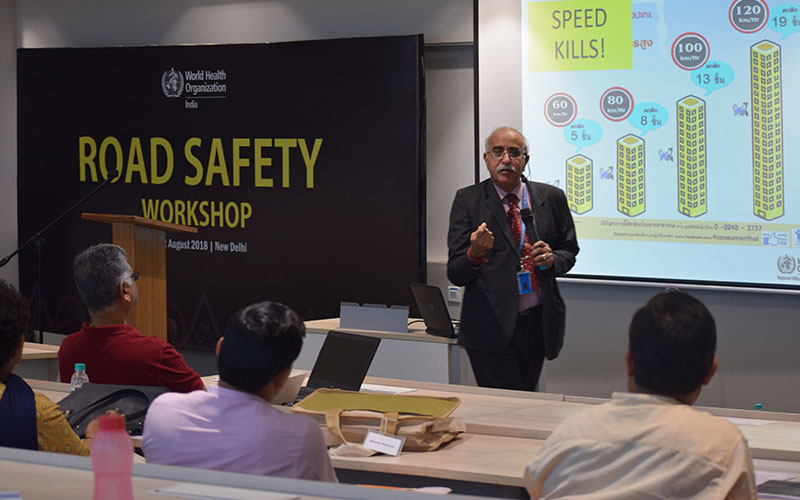 With rapid urbanization and expansion in road network along with one of the highest motorization growth rate in the world, Indian roads are becoming increasingly unsafe. There has been an alarming increase in road accidents over the years from 14,500 in 1970 to 137,400 in 2013. Further, India is the only country in the world which faces more than 15 fatalities and 53 injuries every hour as a consequence of road accidents. Official statistics from National Crime Records Bureau (NCRB) show that in the year 2014 about 1,50,000 persons were killed and 477,731 injured in road traffic crashes. Out of the total road accidents in 2016, 46.3% of all the people killed in road accidents were in the age group of 18-35 years. The highest number of road accidents took place on national highways followed by state highways and other roads and during the time slots of 15:00 to 18:00 hours and 18:00 to 21:00 hours. Two wheelers accounted for the highest share of total road accidents followed by cars, jeeps and taxis.

Road traffic crashes or accidents are often covered in the media simply as events and not as a leading killer of people, the human, health and financial resource for a country. As media plays an important role in setting public and policy agenda and empowering individuals in decision-making, media reporting on road safety is an important mechanism for raising awareness among the general public and promoting specific policy changes. By prioritizing and framing road safety issues as public health stories with strong data support, journalists have an opportunity to put this crisis in its proper perspective, to educate their audience and increase public awareness and ultimately influence government authorities, policy-makers and other stakeholders to take the steps necessary to address the problem.

WHO India commissioned CCC-I to conceptualize and implement Road Safety fellowship for media professionals in the year 2017 and 2018. The project involved identification and selection of journalists working in reputed newspapers, TV channels, online media, radio, etc. and sensitizing them to write data based, in depth news stories. Both in 2017 and 2018, over 100 road safety stories were written in English and Hindi media. Three major milestones of the fellowship were: organization of workshops for journalists,  editors’ conclave, and mentoring of journalists by CCC-I to enhance the number and quality of media stories.